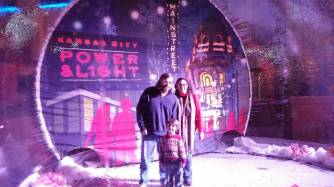 Ian loved going downtown to get a picture inside a giant inflatable snow globe!

2015 has been a good year, although not quite what we expected in some regards. Things have been busier than anticipated (hence the late arrival of Christmas cards and this letter), but we’ve enjoyed it.

Obviously, one of the most important things to talk about is Ian. He just turned four and never ceases to amaze with his energy and creativity. He is hilariously funny and has a great imagination. Ian loves singing and dancing for us (usually with songs he’s made up) and will build with anything he can get his hands on. He is still obsessed with books, cars, trucks and trains, and he absorbs everything around him from new words to what he sees outside. He loves going out to parks to run and explore and enjoys walking around the city, especially if it involves going to a coffee shop for donuts or to Union Station to see trains. He is also starting to develop friendships, and it’s really fun to see him get excited about time with certain peers. Ian is in a neat daycare situation, and we appreciate the care he receives and the many chances to learn and grow there over the past couple of years. Additionally, it is nice for him to attend daycare in a home-like setting in which to thrive while his parents work.

Ian got his first visit with Santa this year.

The big news, for those who don’t already know, is Kate’s job change. She left a job in June and returned to the professional membership association she had been at for six years. The nonprofit she was at for nine months was a good learning experience, but was not the great fit she anticipated from her interviews. The chance to go back to her old office, which has made a number of improvements, was a very unexpected yet exciting opportunity. She is now co-leading the membership department under a new executive director and anticipates amazing things to come for the organization. The last six months have been hectic, but long term, this job should be more family-friendly for us, which we appreciate.

A few months after changing jobs, Kate received a volunteer award from the Kansas City Society for Association Executives for helping update its branding with a new logo and website. Additionally, she was recently given the chance to move on from that and join ASAE: The Center for Association Leadership with her new position. She looks forward to attending its national events and diving in to resources for professional growth.

We enjoy time at Crown Center, especially during the holiday season.

Speaking of jobs, Jon is in his second year teaching special education at a nearby freshman center. Overall, it has gone really well. He does a lot of co-teaching as a special ed teacher in a regular classroom environment, likes many of his co-workers and administrators and enjoys being in a district making some positive changes. Since being hired last year, he has experienced a level of respect not seen in most of his other jobs. The kids know and can articulate that he cares about them. It is often difficult and time-consuming work, but he has the support of the other staff and likes making a difference for the students.

Ian made sure we’re ready for snow, though it hasn’t come yet.

A highlight of the year was Ian and Jon taking a trip to Indiana with Jon’s dad during spring break in March. It was the first time the three of them have traveled together, and the first time in many years that Jon and his dad have returned to where they were born. The trip meant a lot to them as they have few ties to there anymore, and it’s not a trip that will happen often. We also visited Ohio in July and drove down to see Kate’s great aunt, Jo, in Kentucky. It was a special trip, as she passed away a few months ago. Jo was like another grandmother to Kat, since her Mamaw Pearl (Jo’s sister) died when Kate was 10. We’re glad that she and Ian got to spend time together.

A family selfie with a few hundred thousand friends at the Royals Victory Parade.

We’ve managed to keep up with a few interests. Jon continues to play music with friends and with the church worship team. Kate has enjoyed a few good book studies with women from our church and time with friends. Thanks to a fantastic babysitter who is usually available, Jon and Kate have been able to attend amazing concerts (Wilco, Kraftwerk and Stevie Wonder were the big ones) and performing arts events (mostly the Harriman-Jewell Series and one KC Rep production). We also joined with much of Kansas City in celebrating the Royals World Series win this year!

We hope you all had a wonderful year and a Merry Christmas! We look forward to a new year and new opportunities for our family to interact with yours.

Much love from the Smiths!