J and K being cute at the baby shower

It’s been awhile since we’ve updated things, and there’s news on the baby front to share as the due date draws very near.

Our good friends Jonathan and Lena Andrews hosted a co-ed open house shower for us on September 10, with Jon’s dad and step-mom supplying much of the amazing array of food, and my job hosted one for me on September 13. Both were fun and we have been overwhelmed by the generosity of those around us. Our son has been provided with most of his basic necessities, and we cannot begin to fully express our appreciation for all of the things we’ve received. We’ve been slow in getting all of the thank-you notes out for gifts, but they are coming, and there are people we simply can’t thank enough for prayers and encouragement through this crazy experience. 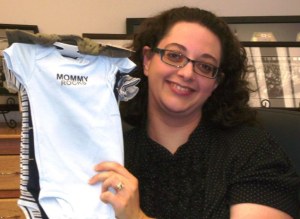 At the baby shower, Jon announced that we’d picked out a name for the baby. For those who haven’t heard yet, his name is Ian Parker Smith. Ian is a name I’ve always liked, and it’s the Scottish form of John, so he’s somewhat named after his dad. The name means “God is gracious,” and we hope that’s reflected in Ian’s life. Contrary to popular opinion, Ian did not come from the host of 80’s British rock heroes Jon has, though he did pay tribute to some on a recent podcast. He did base the middle name on a musical icon, though, deciding to honor Charlie Parker, the great alto saxophonist from Kansas City. If he could have had his way, Jon probably would have given Ian about 10 names to cover his favorite musicians. 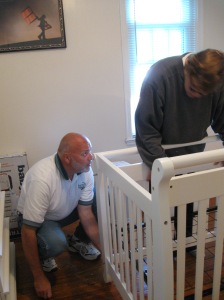 Jon and his dad finishing the crib assembly

My brother, Richard, moved out around the time of our baby showers. We’ve enjoyed having him around the past two and a half years, and he’s been a huge help when we’ve needed it. We’re glad he moved close by, so he’ll still be around a lot. Since his move, we’ve gradually been getting the extra bedroom ready for Ian. A couple of weeks ago, Jon and his dad put the crib together while his step-mom and I got everything else somewhat organized. As everything comes together, it is a strange, but wonderful experience to step in the room and think about a little boy living there soon.

We do have a couple of things to share and ask for prayers about. One is for Ian. I’ve been going in periodically for ultrasounds since July to monitor his kidneys. At my mid-pregnancy ultrasound, one looked bigger than the other. It’s not been a huge concern so far, and the doctors have downplayed it, so we’ve not talked about it much. This past week my doctor checked on things, and thought it looked worse, especially since now the bladder appeared to have issues. I had a more detailed sonogram at the hospital, and it confirmed a blockage between the right kidney and bladder, and the bladder now looks distended. Luckily, things are not quite as bad as my doctor feared, but they don’t know the cause of the problem, and Ian will need to see a specialist after being born. There’s also a possibility my doctor will want to induce labor a little early, something we’d prefer not to do for a number of reasons.

With that, as we prepare for Ian’s birth, we’re still wrestling with Jon’s need of another job. We had been trying to wait to have kids until he could support a family, and so we’re now in a situation we’d hoped to avoid. I will be going back to work full-time within a few weeks of Ian’s arrival, and we’re starting to feel the financial impact of Jon’s long-term underemployment. We aren’t sure what life will be like, other than really crazy. We have no idea why Jon hasn’t been able to find a teaching job (or anything else for that matter), but we know life is going to be stressful with the baby, and it will be difficult to make things work.

To end on a positive note, other than the kidney issue, Ian seems to be fine. He’s almost six pounds, and everything else looks fairly normal. In spite of less than ideal circumstances, we are excited to welcome him into our lives. We know becoming parents will be an amazing experience, even though we’ll have a rough start. It’s incredible to watch Ian grow, and see and feel movements. I can’t imagine what it will be like to actually hold him. Thank you again to everyone who has shown us love and support. Please keep us in your prayers. Hopefully the next baby update will be about the arrival of a beautiful, healthy boy. 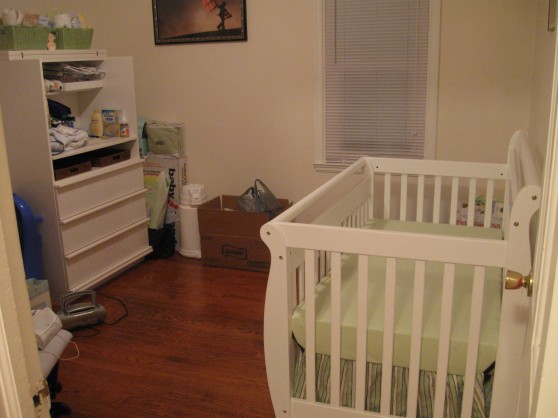 This is Ian's room. We're working on the finishing touches and getting a few more things put away.

One thought on “As the “dude date” approaches …”