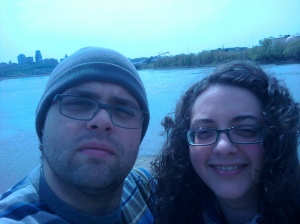 As some of you may have noticed, we’ve been a little quiet on what we’ve been up to lately. We didn’t get out Christmas cards with our usual end of the year letter in December 2010, and we’ve also not said much on the blog about the details of our lives recently. We now have some big news to share, so here’s what’s going on with us and some highlights of the past year or so.

Kate finished her Master of Liberal Arts degree in December (which is largely why no Christmas cards got mailed out). She is very relieved to be completely done with school, and it’s nice that now neither of us have classes or homework worry about. Katy has continued to judge winterguard competitions around Missouri, and just finished her second season serving as the Secretary for the local judges association. She’s still working at IAAO helping with marketing/communications and general office needs, and occasionally volunteering at the Nelson-Atkins Museum of Art.

Jon’s band, My Science Fiction Twin, has been re-energized after not doing much for a few years. They’ve played several shows around Kansas City and are hoping to do some recording soon. Jon also set up a web site with all of his solo material. This past fall he was asked to help organize and host a series of concerts at Bennetti’s Coffee Experience. Bands played in the parking lot every Saturday in October, and it seemed to be a good experience for all involved. Jon is still working as a paraprofessional at Raytown Middle School and has seen his student make great progress (Jon was even nominated for Support Staff of the Year). He continues to seek a teaching or administrative position, and got certified in math in hopes opening additional doors for job opportunities.

We’ve changed churches over the past year. After being in one place for our entire marriage, we realized it was time to find somewhere closer and with more of a focus on certain things we valued. We’re currently wrapping up the membership process at Redeemer Fellowship in mid-town Kansas City. We’ve appreciated the church’s commitment to great teaching and to community involvement. It’s also been wonderful to start connecting with people around where we live, work, and hang out.

Finally, the big news we promised at the beginning (don’t you love that we made you wait until the very end) …

We’re going to have a baby! We found out in mid-March that Kate was pregnant, and she’s just reached the end of the first trimester. The due date is currently set at November 4, 2011. So far everything has gone really well, with good health reports and minimal sickness, so we pray it remains that way. Most people we’ve told have asked if we’ll find out the baby’s gender, and we think we will. It just seems easier for planning and gift registry purposes.

We’re obviously a bit nervous about Jon’s job situation and becoming parents for the first time, but we’re also very excited as we’ve wanted to start a family at some point, and we believe that God must have a better plan in mind than we do.

It looks like our eighth anniversary and Thanksgiving and Christmas holidays will be very busy and extra special this year!

We hope all is well with those of you reading.

Grace, Peace and Love,
Jon, Kate, and baby Smith
(and Einstein, who we hope likes babies in six months)